One of the greatest reminders of why we participate in the Toyota Pro/Celebrity Race each year happens far away from the track, before the nail-biting and excitement begins.

On Thursday of race weekend, out of the glare of the media spotlight, we visit a local children’s hospital, and the smiles on those kids’ faces – as well as the drivers – are priceless. 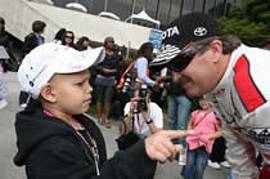 In previous years, on the same day we visit the kids, all participants and instructors would ‘walk’ the track, corner by corner, to visualize and re-learn the circuit.

This year, and for the first time ever, there was on-track activity on Thursday, so it was more chaotic than usual and we were unable to do so.  That night, however, we held our first drivers’ meeting to launch the race weekend and did our best without the benefit of the ‘walk.’ The next day, the first thing I noticed was that this race has become quite the mental challenge both on and off the track, and the ‘trash talk’ started almost from the get-go!  I heard the drivers trying to get into each other’s heads, which turns the heat up on the competition.  During the first (and only) practice session, an instructor rode in each car with John Salley, Nancy Lieberman and Raymond Cruz to give them as much help as possible because they hadn’t been able to attend Press/Practice Day due to various professional obligations. During her practice run, Nancy kissed the tire wall coming out of Turn 8 just before the back straight, which meant the instructor really earned his keep since he was riding!   I saw Mike Skinner towing some drivers out there during practice, leading them around and trying to set the pace, which is great for the other competitors as it allows them to run good, fast laps. I saw Daniel Goddard enter Turn 1 way too fast, but he had the presence of mind to use the run-off to turn around and re-enter the race track undamaged instead of hitting the wall – that was great! Unfortunately, Brad Lewis smacked the tire wall pretty good going into Turn 9, but luckily he was not hurt.  He simply lost focus for one split second and lost reference of his braking point.

Since Brad was the one who hit the tire wall, it was quite a surprise to see him pull it all together in the qualifying session to grab pole.  (In all fairness, he was one of many who could have done it, because the field was soooo tight.)  He overcame the incident in practice and showed great confidence and smoothness out on the racetrack.  Qualifying always comes down to running ‘your best lap’ and many were running up front, but Brad was the one who nailed it.  Jamie Little showed discipline behind the wheel and landed a starting spot in the front row (outside).  Right behind them was William Fichtner, to round out a deserving top three. Come race day, I can honestly say I hadn’t seen a race this good in a very long time.  Brad Lewis took the lead off the start and led the pack through the first turn safely.  Wilmer Valderrama got an excellent start as well, passing several cars before Turn 1.  Jamie Little didn’t get the best start, but instead of getting frustrated, she rose to the challenge and strategically worked her way back to the front.  After moving behind Lewis, she saw he had such a big lead that she wasn’t sure she could catch him.  But as luck would have it – good luck for Jamie, not so good for Nancy Leiberman – a tow truck was sent onto the track to fetch the Basketball Hall of Famer’s car out of Turn 3 with only two laps to go – and out came the yellow caution flags, which bunched up the pack. By this point, Mike Skinner had overcome the Pros’ :30-second handicap and had worked his way through the field of celebrity drivers.  He was following Little and Lewis, and seeing that they were battling it out hard for the win, instead of passing them, he stayed back to let them race.

Meanwhile, with Little on his tail and one lap to go, Lewis once again lost sight of his braking point in Turn 9 – the exact spot he had his incident in practice – and slammed into the tire barrier.  This opened it up for Little and Skinner to go by.  Coming out of the hairpin, Skinner made a move, but Little gave it her all and was able to hold off the NASCAR Craftsman Truck Champion to emerge the overall victor in the Toyota Pro/Celebrity Race.   The fans loved it, and for the second time in the 30-plus years of this race, a female participant won it!