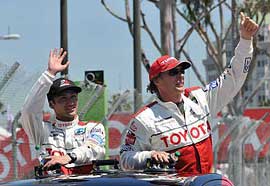 Fichtner, a versatile character actor who has appeared in such big-screen blockbusters as “Black Hawk Down” and “The Perfect Storm,” led the pack as an excited crowd cheered him on throughout the race.

From the first laps, Fichtner fought off Trucco, whose high position was a surprise to many, since Trucco had landed in the middle of the pack as a result of the previous day’s qualifying session. Actor–turned–pro driver Frankie Muniz was a contender as well, as he made his way up through the pack.

Trucco placed third overall, just two seconds in front of the fourth-place Muniz. For much of the race, the main battle was between Fichtner and Gushi, as they battled it out for the top spot. In the end it was Fichtner who crossed the finish line in his race-ready Toyota Scion tC, just three seconds ahead of Gushi.

Gushi spent the duration of the race battling to overcome the pros’ 30-second handicap, quickly weaving among the racers to threaten Fichtner’s lead. Though he was unable to beat Fichtner, Gushi did score the best lap time of any driver, making the circuit in 1:46:429. Gushi was happy to stand on the victory stage alongside rival Fichtner and said:

KEN GUSHI: “This was the best group I have ever worked with and raced with and I am really honored to have been able to compete in this race for the kids. I feel very lucky that something so enjoyable is also for such a great cause.”

It Was All For The Kids..

Donating over a million dollars to hospitals in Long Beach and Orange County, the burning of rubber on the race track was a chance to help sick kids in the area while raising awareness to the work of the hospitals.

Before the race rhe celebrities were trained by FAST LANE at Willow Springs Raceway. Checkout the pictures below and the footage in the videos section!