LONG BEACH, Calif. — Alfonso Ribeiro won the 2016 Toyota Pro/Celebrity Race, triumphing over the most accomplished field the annual charity racing event has ever seen. The roaring crowd witnessed the stunning performance by Ribeiro, who started the race in the 8th position and successfully avoided any collisions or walls to take the checkered flag.

Ribeiro started in the middle of the field, but in just two laps passed seven drivers, including Dara Torres, 12-time Olympic Medalist, and Adam Carolla, comedian and radio personality, to secure the lead. Just as the race was beginning to heat up on the 1.97-mile street course in downtown Long Beach, yellow flags were thrown.

“I turned the corner and had about five hundredths of a thousandth of a millisecond to react, and there was nothing much I could do,” said Sean Patrick Flanery, actor best known for his role in “Boondock Saints.”

Davern, upon taking turn eight, had hit the tire barriers, and Carter who was right behind him, hit Davern’s rear quarter panel.

“I knew when I saw his car, and could read his name, that I was unfortunately going to hit him,” said Carter.

While pulling the damaged vehicles off the track under a local yellow flag, the field came around turn eight, and Flanery, looking to pass “Mad Max” Papis, former Champ Car driver, after the turn, ended up rear-ending Carter.

Race officials threw the red flag, stopping the race in order to clear the track of vehicles and debris, and ensure all drivers and track personnel were safe before continuing with the historical race. 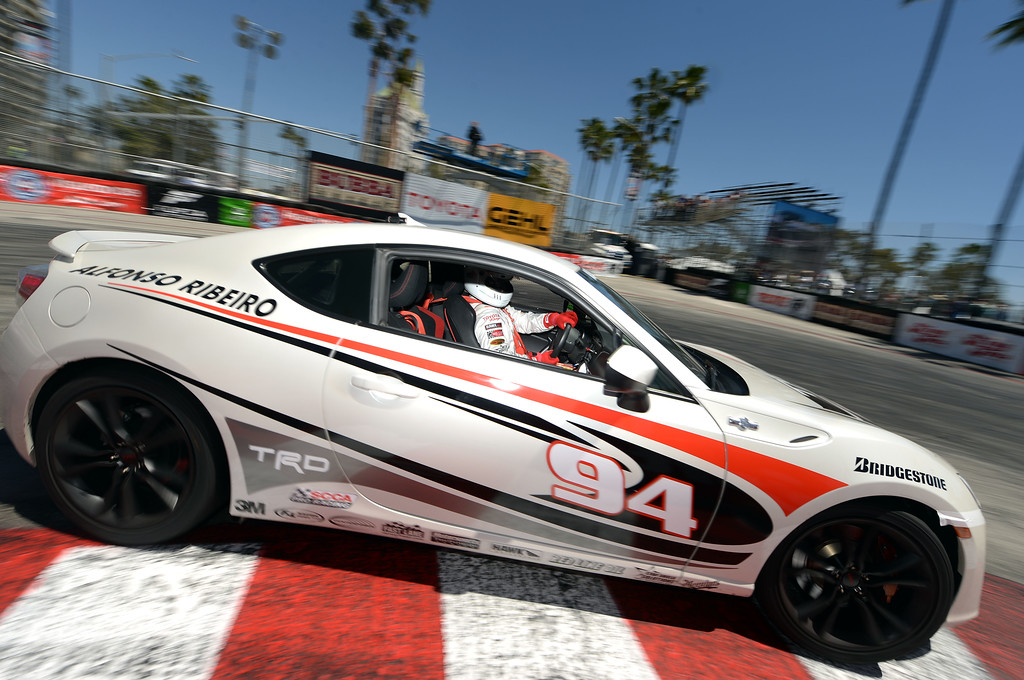 “At the end of the day this is all about the children, ‘Racing For Kids’ is what it’s all about, and everyone here understands that,” said Carter.

Millen added, “I’m just happy to be here, and to race with all these awesome people, who are all champions.”

“The pace of this race was extremely fast and the drivers were very competitive at the start,” said President and CEO of the Grand Prix Association Jim Michaelian. “There was some exciting action in the field that had the fans on their feet, and we are glad everyone will walk away unscathed. Congratulations to Alfonso Ribeiro on his victory. A special thanks to all this year’s participants who helped make the final race exciting. All their enthusiasm is, ultimately, for a great cause, and the Toyota Pro/Celebrity Race was proud to be able to make it happen one last time.”

Toyota will donate $5,000 to Racing for Kids in the name of each participant, for a total of $100,000, and an additional $5,000 to Fresh Start Surgical Gifts on behalf of Ribeiro. Fresh Start Surgical Gifts is a national nonprofit program benefiting infants, children and teens with physical deformities caused by birth defects, accidents, abuse or disease through the gift of reconstructive surgery.

The Toyota Pro/Celebrity Race is scheduled to be broadcast on CBS Sportsnet on May 8 at 6 PM ET, and will re-air numerous times. (Check your local listings for details)